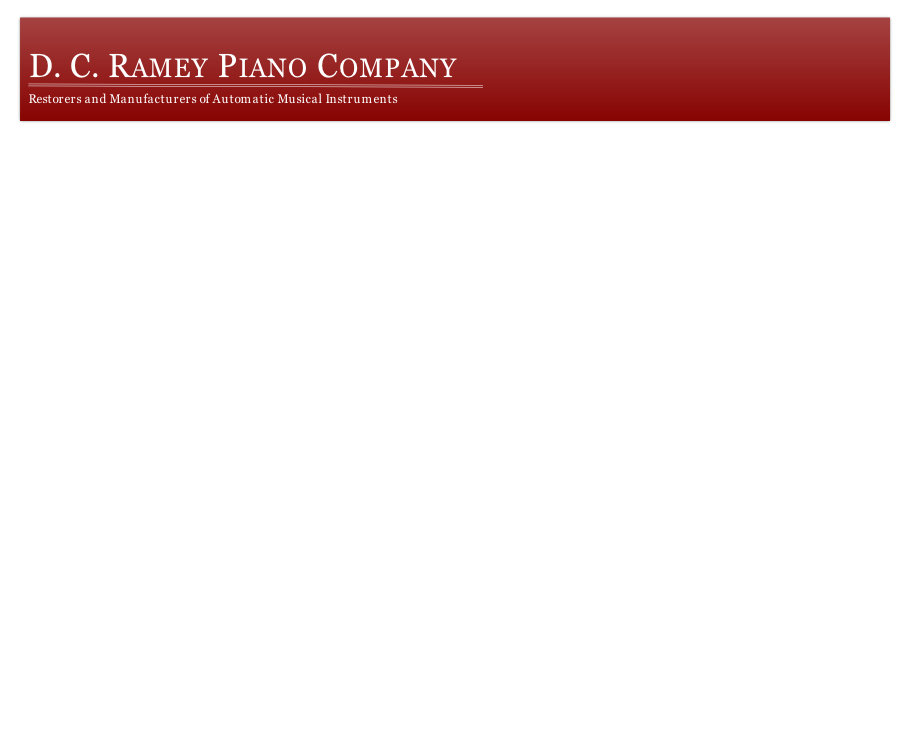 The Encore Automatic Banjo was the first American coin-operated automatic stringed musical instrument to be commercially successful. The first Automatic banjo was introduced in 1896, before the name "Encore" was used. It operated on the electromagnetic system of which none are known to survive today. The electromagnetic system proved impractical due to the availability of electricity and the danger of sparks igniting the machine. It is theorized that many of this type were converted to the later pneumatic system that all the extant machines feature. In 1897, the name "Encore" was trademarked. The name appeared both in the crest casting on top of the cabinet and on the lower portion of the neck of the banjo itself, inlaid in mother-of-pearl.

Two companies were formed to produce the instrument. Charles B. Kendall established the New England Automatic Banjo Company located in Boston, which governed the rights to Maine, New Hampshire, Vermont, and Massachusetts with nonexclusive rights to foreign countries. The American Automatic Banjo Company of New Jersey was established with W. Scott O'Connor, the major stockholder, as president, this company retained the rights to New York, where it was located, and the rest of the United States outside of New England. It must have been intended to be the parent company since all the patents were assigned to this company. The American Automatic Banjo Company licensed or partially owned several Encore distributors, and it was the sole producer of music rolls for the machine. 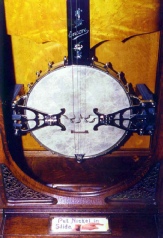 The two companies used the same parts and the outside appearance was the same. Both used the same custom made banjo, the same case, most of which were of quarter-sawn oak with a half-dozen of mahogany, the same cast-brass decorative corners of which there were two designs, and the same coin slide and counter. Some of the oak-cased machines were made without coin mechanisms as home models. The Encore utilized an electric light bulb not only for illumination but also for temperature and humidity control. The animal-skin head of the banjo would stretch and shrink not only affecting the tuning but the depth of stroke of the picker mechanism as well.

June 28, 1898, Walfrid Gustafson was granted patent U.S. No. 606,207. The patent included an improvement in the pneumatic picking device of the Encore. This device most closely resembles the style of pickers that survive today. The device forces the picker to travel in an elliptical path around the string. The picker picks the string once and then returns to its original position, without hitting the string on the backstroke, ready to be activated again. A pneumatic hinge, two springs, and a guide template, which the picker follows, accomplish this fete consistently and accurately. 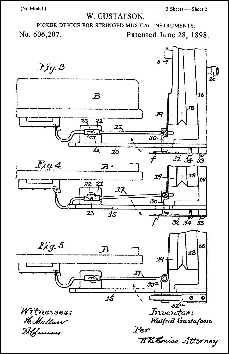 The New England Automatic Banjo Company produced perhaps 200 machines between 1897 and 1900. This version was somewhat of a primitive machine. The cabinet had an early style crest, which featured the Encore name in script. The paper roll was loaded from the rear of the machine and operated a valve chest that used 5/16-inch diameter steel balls for valves, which proved unreliable and inefficient. The companies ran into severe financial trouble. Kendall and O'Connor decided to re-form the two companies and start over.

In April of 1899, the American Automatic Banjo Company began to break-up into two companies. It was the sole producer of music rolls for the Encore, but it also made rolls for other companies' products. The name of the company was changed to a less descriptive American Automusic Company. A year later, the music roll manufacturing part of the company split to form the Connorized Music Company with James O'Connor (presumably W. Scott's son) as president and treasurer. James O'Connor was instrumental in the development of the first electromagnetic automatic banjo and helped to perfect the pneumatically operated Encore Banjo. The American Automusic Company, with W. Scott O'Connor remaining as president, continued to manufacture the Encore while sharing their factory with the Connorized Music Company. The American Automusic Company provided a catalog of about 2,000 available musical numbers and tried to keep as current as possible to offer the very latest musical selection of the day, such as "My Old Kentucky Home," "Yankee Doodle Dandy," "On the Banks of the Wabash," and "The Maple Leaf Rag." 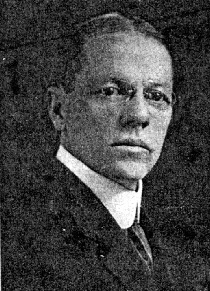 It was not until March of 1901, that the Eastern Specialty Company and the New England Automatic Banjo Company were re-incorporated to form the Auto-Manufacturing Company. From then on the company went downhill, while the New York firm prospered until around 1903. The Auto-Manufacturing Company produced its banjos in Boston. The machines were rented out to such public places as taverns, theatres, lodges, restaurants, and drug stores. The Boston version of the Encore was experimented with unsuccessfully. For example, instead of changing the ball-valve system, aluminum balls were sought to replace the steel balls because aluminum is lighter, therefore hopefully requiring less electricity to operate. The roll frame of the Boston style was kept in the rear, which caused some problems since the rolls were made to operate the machine produced by the New York firm, the sole producer of the paper rolls. 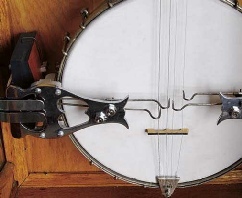 The novelty of an automatic banjo quickly wore off as automatic pianos were introduced. The nickelodeon's popularity soon made the Encore obsolete. In 1906, W. Scott O'Connor had abandoned the automatic banjo business for the much more lucrative music roll business. The Connorized Music Company became a major manufacturer /distributor of player piano rolls and moved to a larger factory. James O'Connor didn't give up entirely on the automatic banjo. In 1914, he introduced the Banjorchestra, an orchestrion that featured an automatic banjo identical to the Encore, along with drums, tambourine, castanets, triangle and piano. The Banjorchestra was never as successful as the Encore. But even as successful as the Encore was, by 1916, used models were sold for as little as $25. 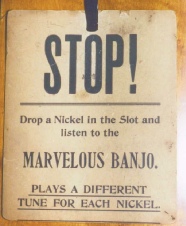 The actual number of Encores produced is very difficult to determine since there are many conflicting statements from various sources concerning the quantity made. Richard Crandall, an Encore Banjo enthusiast, estimated the number of machines produced by relying on financial statements, production papers, and serial numbers of extant machines. He believes that there were around 2500 Encores built. Compared to other novelty instruments; the Encore was extremely successful. There are at least 20 known to be extant.

Today, the Encore Automatic Banjo is both highly desirable and very rare. It may be the elusive, never-to-be-recaptured feeling of an earlier era that make such instruments so fascinating today. The sound produced by a properly restored Encore is the exact sound that our ancestors heard and enjoyed. One can listen to an old phonograph record or view an old film but the experience is reproduced through a medium. It is not so with automatic musical instruments such as the Encore. There is no medium between today's listener and the "performer" of years ago. The performer is here today, and plays for you undiminished, with nothing lost or changed, just as in years past. The performance that delights the listener today may have delighted, in exactly the same way, Queen Victoria, Teddy Roosevelt, a New York beer hall patron, or a Paris streetwalker years ago. Through the music of such machines, the emotions of another time, another place, the entertainment of another era comes to life unaltered and undimmed today. This along with its history makes the Encore a choice instrument to be acquired by today's collectors. The demand for Encore Banjos is so high that a market has developed for newly made instruments.
The New Encore Automatic Banjo

In 1976, Dave Ramey purchased various parts of original Encores. From these original parts, copies were made, which led to the remanufacture of the Encore Automatic banjo. Dave made some engineering improvements that enable his model to out-perform its predecessor while keeping the outward appearance the same. Copies of some original music rolls were made. Art Reblitz, a noted author, restorer and music roll arranger, arranged two new five tune rolls, the first new arrangements of music for the Encore since the closing of the American Automusic Company, nearly a century before.

To date, D. C. Ramey Piano Company has built over 50 new Encores that have been sold to all parts of the world. Two unique Ramey instruments have been added to the Encore line, the Encore Double, and the Encore Duet. The Double consists of two banjos mounted side by side in a custom made "stretched-out" Encore cabinet. The Duet is similar but features a resonator guitar and a banjo. D. C. Ramey Piano Company also manufactures their version of the Banjorchestra, the Ramey Banjo-Orchestra. 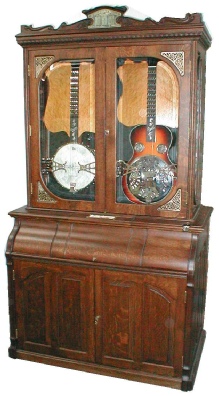